Luna's collapse has brought down the entire decentralised economy

Luna's collapse has brought down the entire decentralised economy

Good morning Lions oh wow! what a day we have on our hands so many questions and not many answers as Do Kwon parachutes himself to public enemy number one.
This is quite the market collapse will we see Luna recover? maybe, maybe not but I want to look a little deeper than that to see the broader economic damage Luna has caused beyond it's own network.

I think a core issue that has led us here today is the Luna Foundation Guards decision to back UST with Bitcoin which I recently wrote about as being a bad idea. Backing one volitile asset with another was never going to end well and LFG should have backed Luna not UST with real world assets like precious metals or fiat.

Most depegs and crashes occur during a market crash so Luna selling Bitcoin to stabalise UST is bringing the market further down far beyond just the Luna ecosystem. As UST was growing in popularity and many tokens were paired with it it further brought many of the other tokens down with it.

Sadly this event is no where near over and can rapidly get worse due to UST's rapid growth, widespread adoption and it's Bitcoin reserves dumping.

Even once UST repegs another catalystic event could potentially occur once all those buying UST unpegged sell to make a profit as it repegs sending the entire blockchain ecosystem on another death spiral.

It's going to take a lot to get us out of this one.

Heavy Heart for the Luna Projects

We can't talk about the crash without extending our thoughts to those who have spent months building and developing projects on Luna only to awake to their projects rapidly declining and turning to dust. As someone who has slowly been working on my own project I know the hours of operation and own money spent and like many, much of my project has turned to dust. Ontop of my own investments in Luna....

This is a monumental crash, one that won't be easily forgetten and despite Do Kwon's reassurance that he will rebuild there is another aspect that requires careful consideration. Customers, will he have the investors to support his endevours?

Only time will tell.

Picked up a tiny bag under $1

I have been buying more. I wonder if it will go lower though.

I'm tempted. But I rekon he will run. 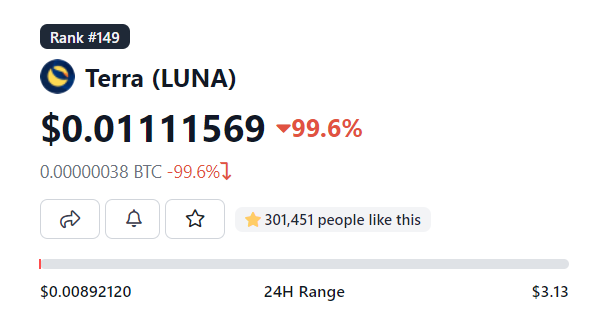 It is now dust. GG it is just a meme coin

Insane how quickly things can change. Imagine if you were on vacation without your phone this week... and ya come home to this!

My heart is sad to, but it is the risk of highly unregulated crypto markets, and there is no doubt the governments will show case this as well in a push for regulation.

Still hurts watching, I want to know how 41% staked has turned into 18% no way everyone was unstaking 21 days ago.

Yeah, I don't know the details as I wasn't in.

I'm sure sorry that you are so effected. It's painful even to watch and I'm not in.

it is what it is, least my tax will be mitigated with this dust :( 😞

Coordinate attack by the hedgies is my best guess.

yes you are right. we should wait for the right time and time will tell. This crush is cause of many broken heart but we can hope for better tomorrow.

The entire situation is nuts. I really feel bad for those who have developed several projects on Luna blockchain, it’s so heartbreaking to have your entire work, resources and energy face such awful decline.

Sad to hear you have investments on Luna as well.
I honestly don’t share Do Kwon’s hope for betterment and I’m sure tons of people feel this way too.
Only time can tell really.

We have been waiting for this crash and it seems quite orchestrated. I wish I had some money to buy up Hive @ $0.50.

What happened to LUNA is disheartening. Not only the investors took the hit but also those behind the project. No one would have wanted it to crumble down like that. It's like a nightmare.

i'll soon be putting out a video why i don't feel sorry for luna investors. Consider it a blessing if you didn't get rekt so that you aware you're probably going to be next

what are you on about? next for what?
also, I did get rekt...

cool, ill be sure not to watch it

It's nice you come across as a major asshole. Only problem nobody watches your videos.

Wow so if that's so true why does just one video i did not long ago have over 700 views on it? my top videos over 20-30k views which is considered viral these days? huh?

I'm only here for the free transactions dipshit.. and i hate hive because of bottom of the barrel figures like you, lol.

Go ahead and don't listen i suspect that's why these terra luna people over there offing themselves right now and nobody give a shit about them really. So here's what i recommend.. i recommend all those terra luna folks and you included watch my next upcoming video and i'm going to impart some helpful advice to them.

i have nearly 2500 subs.. i got enough people to listen to me.. why do you think i'd give a shit about your opinion and youtube cares enough to write me a check every month for people flocking to listen to me and you guys got very little eyes on your posts and nobody gives a shit about you guys blockchain.. i can change that if hive is not dumb like the terra luna folks.. that's their choice.. Now get lost bottom of the barrel hive person..atleast marky mark managed to scam alot more influence and power than you have.. you don't have any power around here or any influence get lost, lol

yah gimme some more of your wisdom during a bear market. Can you just off yourself from the platform. You are pollution.

Well lucky for you.. you're not worth wasting my resource credits on, lol..So i wanna talk about facts.. it's feminine to have emotional conversations.. you all wanted the decentralized social media. you're the guys talking about how important it is.. i told you all it's not as important as you all think.. you all disagreed so twitter kicked trump off now elon wants him back on there. So why don't you guys make up your minds. Why would you want me off this platform because my opinion different than yours? i didn't bother you.. you came in my reply bothering me.. what are you putin in the ukraine lol

You are wasting RC on me

and you making yourself look like an idiot.. didn't you once work for me? So a person who listened to me telling me others don't listen to me.. you're a joke man

I thought I was working for myself until I realized the 'idea' guy was a complete fraud. You are basically the typical guy with a trench coat filled with stolen fake rolex watches. Yah you that guy!

stfu MykosCoin is a failure you narcissistic retard. Go peddle more HEX why do you even blog here you 'hate hive'

I think the BTC move was the bad move as well but I heard some reasoning about how Terra bought BTC because they didn't want the BTC maxis to trash it. Why? If Terra sold all the BTC they had in their treasury, prices would be highly affected and nobody wants to affect the price of their assets.

Of course, that is all speculation but that might prove to be a valid reason why they choose to buy BTC.

Scenario like that of Luna happens a a lot and while it very unfortunate seeing the market crash real hard and money lost which I am still very emotional about, I just have to understand. I do not see Luna Blossoming again like before, it might just be a shadow of itself like EOS

It's bad, isn't it. @melbourneswest - the fact that it's knocked just under $5,000 off BTC and around £700 off ETH (at time of posting, obvs) is mind boggling...We divested our main chunk of Ethereum at the end of last year to fund equipment upgrades, and in this situation, it's held us in good stead.

I am now left holding dust

I'm so sorry to hear that, @melbourneswest 😞

It was never decentralised