Get Rich Playing Gods Unchained! Not Really Though... 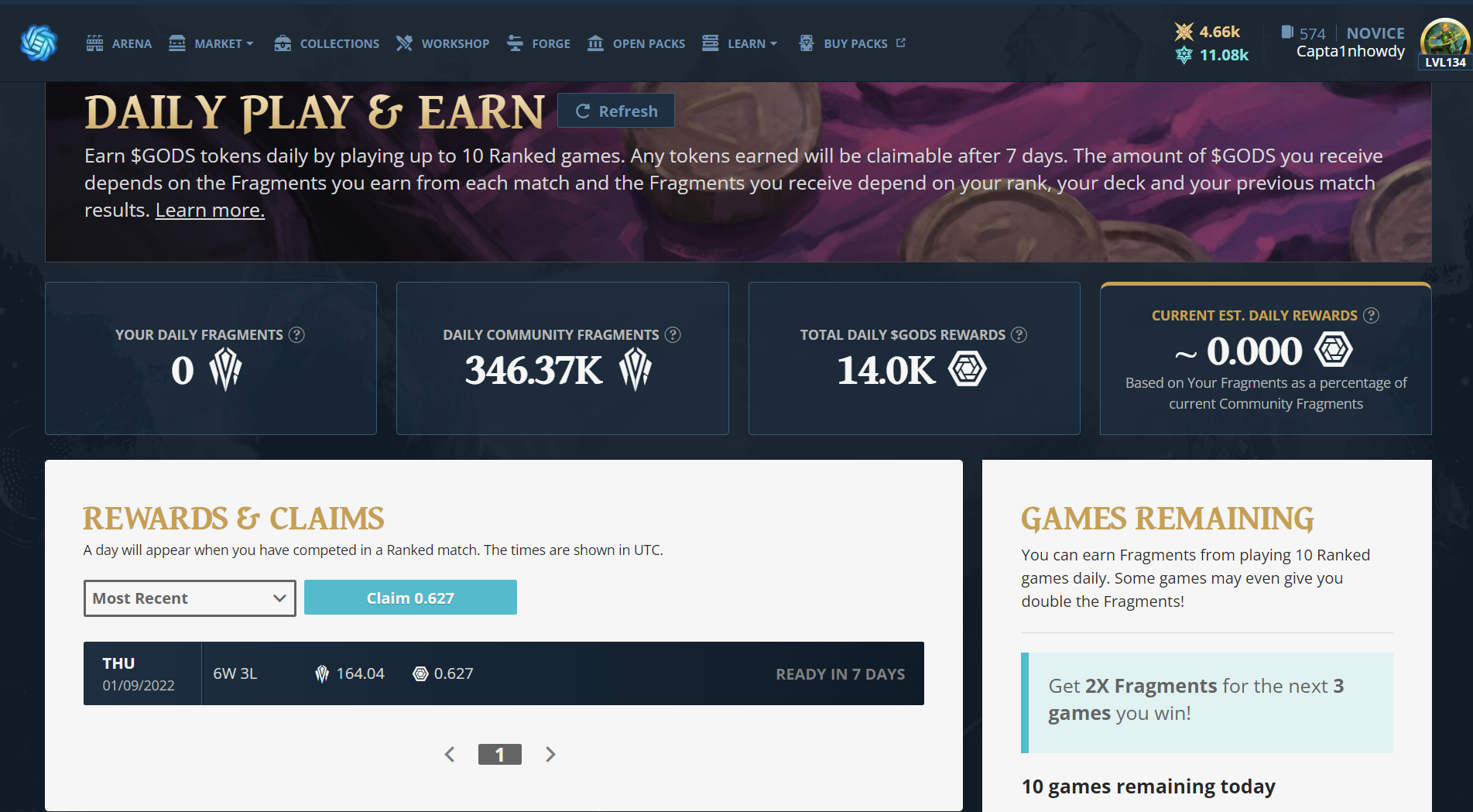 It's been just over 24 hours since the launch of Daily Play & Earn on Gods Unchained. A little over a week ago, I wrote about it over on the @lbi-token account and I have to say I was a little excited. I wasn't expecting to earn hundreds of GODS tokens every day... I was expecting it to be enough to get someone interested though. Look, there's nothing wrong with having a play to earn token but if you want to use it as an incentive to entice new players to come in, it gets interesting. Think about Splinterlands for a minute.

Splinterlands is a great game, it's just not really my cup of tea. I played it every day for a little while there but I fell off pretty quick. Splinterlands used to reward you with tiny amounts of DEC every battle, but has recently shifted to SPS (I think). The games go very fast, and you can even fast forward through the games. This makes the tiny amount of rewards less annoying because at least you can grind them pretty quickly. Obviously it isn't all about farming as many tokens as possible but... The play to earn mechanic needs to make sense.

I've been a big fan of Gods Unchained since the very beginning. I really love how they have tried to keep the amount of GODS flooding the market low. I did think though, that the Daily Play & Earn rewards would look a little more enticing, at least in the beginning. The difference here is that Splinterlands games are quick, and the rewards are proportional. Gods Unchained games can go on for a while. Like 30 minutes sometimes. So you play 10 games to earn for the day... and my first day of earnings was a whopping 0.627 GODS.

I think it took me around 2 hours to get these 9 games in. I thought I had done 10, but whatever. I had 6 wins and 3 losses, not too bad but definitely not my best. The game seems to have gotten even more competitive considering it was a week day. Regardless - 2 hours to earn 0.67 GODS, which is roughly 20 cents at current prices... Is kinda bullshit. I get they want the inflation and distribution rate to be low but come on. I can see earning a couple cents from a Splinterlands game, but if I battle my dick off for 30 minutes I feel the reward should be proportional.

See what I'm saying? Not that I mind realistically because I genuinely enjoy Gods Unchained, but it's pretty low in my opinion. Supposedly the amount distributed each day is proportional to the amount of players. More players = more GODS distributed, therefore more rewards per player. Wouldn't it have been smart to start with the rewards higher and use that to market the mechanics to new players?

Like, what's their angle? There's not really a growing player base. It seems kinda steady, but more consolidated on the weekends. Even so, the player base is rather small. How could we bring in more players with a feature we've been working on for supposedly a very long time? Hmmm... Maybe reward the new players coming in with higher GODS distributions for X amount of time.

Maybe have boosted earnings based on how many GODS tokens you have in your wallet. Better yet, how much GODS you have staked. There's a lot they could do with it.

I'm curious to see the difference in Daily earnings vs. Weekend Ranked earnings pack wise. The weekends now only earn you packs, depending on the amount of wins you have. So how you earn GODS (a tiny amount) during the week and packs on the weekends. Personally, with these tiny earnings I don't really see much happening with the game in terms of growth. Maybe I'm wrong. Maybe I'm crazy.

I'm no blockchain game developer, so you know. Maybe the tiny rewards are a good thing for the economy of the project. It definitely doesn't add much sell pressure considering people are barely earning any lol. I really hope they add staking and things like that soon.

Sorry, you're not gunna get rich playing this blockchain game.

Thanks for reading! Much love.

Wanna learn about all kinds of things you can do with the crypto you earn blogging on Hive? Check out my index - Learn Crypto Stuff for some fun educational crypto stuff.

Wow that sucks! Let's see how it increases going forward. Do you have a lot of meteorite / shadow cards? Because I am pretty sure this is going to be the most multiplier out there to boot the marketplace.

Clearly I don't have enough. Off to the Forge...

Just did my 10 games 7-3 at Solar Gold Level. Without optimizing all the meteorite core and stuff. Off to the forge too!

They estimate I will get 8 GODS tokens but there is 19 hours left for other players to earn some nice fragments. So I might get 0.5-1 as you did

I only picked up 0.324 myself considering it's running for about $0.31 at the moment uuhhh makes Splinterlands rewards look amazing right now.

That's what I'm saying! What the hell lol