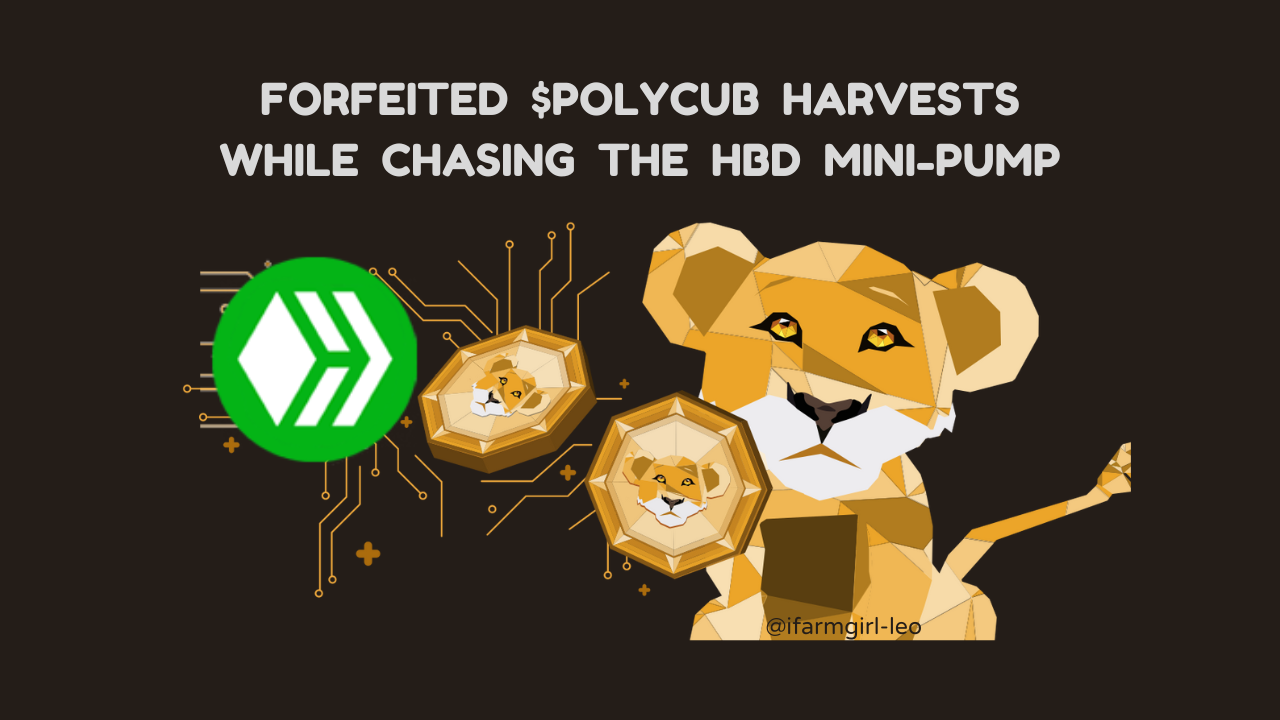 Last week (13th September) I was alerted of the change in HBD price. Checking on CMC I noticed that HBD was at $1.20 and I knew I had to take advantage of it since it rarely happens and the profit can be good.

I have some stake on pHBD-USDC on the Polycub Liquidity Pool and I decided to take it out and unpair them so I could swap the pHBD. Unfortunately, Polygon network was slow and uncooperative that while pulling out my LP from Polycub, the transaction got stuck for some minutes. The network must have been really busy.

By the time I removed my liquidity via SushiSwap, HBD was down to $1.15. And while swapping pHBD to USDT, I basically saw the profits dwindle away before my very eyes when HBD price dropped to $1.11. But because I've already initiated the transaction, I had to continue. I made a little over 5% profit on the swap before HBD went back to its peg. I was happy of course...

Until I realized my mistake!

Although I harvested the $POLYCUB that were farmed, I forgot to claim those in the unlocked and locked vaults. I only recognized about my grave mistake when I was adding back liquidity recently and noticed my locked and unlocked $POLYCUB seemed to have gone elsewhere. In my excitement to make some profits on HBD, I unknowingly forfeited my $POLYCUB harvests. An amusing experience and a lesson learnt I just had to share.

Good thing I can farm again. It may take a while but I believe it will be worth it. After all, we're in for the long-term since we've locked our initial xPolyCUB into the vexPolyCUB vault.

So sad,but it is a way to learn from the trade.

Yes, it's quite funny that I didn't even realize for days, lol! But yes, will keep farming. Thank you for your encouragement :)

100%
0.00 VYB
Reply
[-]
poshtoken  4 months ago
The rewards earned on this comment will go directly to the people( @ifarmgirl ) sharing the post on Twitter as long as they are registered with @poshtoken. Sign up at https://hiveposh.com.
100%
0.00 VYB
1 vote
Reply
[-]
cflclosers  4 months ago

Thanks for posting this. Sorry it didn't go exactly as planned but posting about the exact steps you took is really helpful for others.

Hey @cflclosers, here is a little bit of BEER from @isnochys for you. Enjoy it!

Do you want to win SOME BEER together with your friends and draw the BEERKING.

Thank you too, I'm glad you find it helpful. I'm laughing at myself when I realized what I did and lost what I have been farming for a while hehe. Now that the APR of the pool is low (7+%), it will take me longer to farm especially that I have sent half of the HBD to CubFinance.

This post has been manually curated by @bhattg from Indiaunited community. Join us on our Discord Server.

Do you know that you can earn a passive income by delegating your Leo power to @india-leo account? We share 100 % of the curation rewards with the delegators.

Thank you lots for your support. I appreciate it greatly :)

Congratulations @ifarmgirl-leo! You have completed the following achievement on the Hive blockchain and have been rewarded with new badge(s):