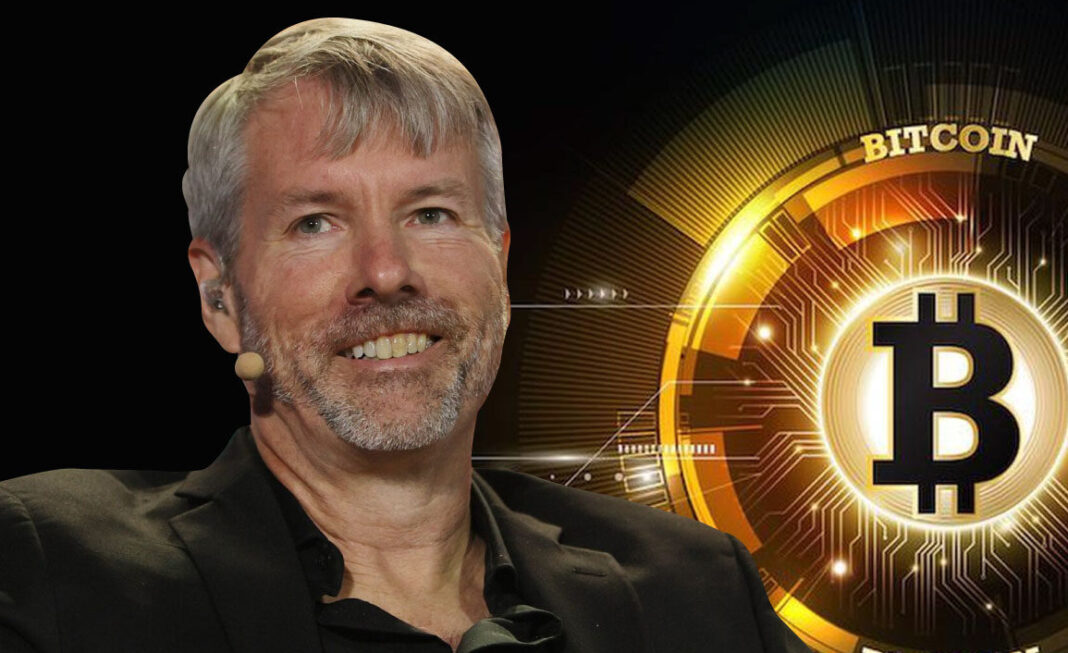 Bitcoin is a bank in cyberspace, run by incorruptible software, offering a global, affordable, simple, & secure savings account to billions of people that don't have the option or desire to run their own hedge fund.

Michael Saylor will no longer be the CEO of MicroStrategy, and will be changing his role to an Executive Chairman which will allow him to focus all things Bitcoin. As the news of this shift in the company leadership was spreading, Saylor tweeted the following:

In my next job, I intend to focus more on #Bitcoin. ₿

Some may say, "It's about time Michael Saylor let somebody else run the company". In fact, some friends I talk expressed the criticism of his focus from running the company and to bitcoin. It is true, ever since Saylor discovered bitcoin, he has been super obsessed with it. He is probably the most obsessed person with bitcoin. I say it as a compliment. This obsession is very genuine, fully based on solid reasoning and fascination with the innovation.

Not only Saylor has been successful in building solid company, he is also longest serving CEO of a public company. Regardless all the criticisms, Saylor has built a very profitable company that managed to accumulate a lot of cash and preservation of the value of this company cash is what lead him to seek solutions to wealth preservation and lead him to bitcoin.

Some of the news say he is resigning because company will be reporting $1.9 billion in losses. I am not totally convinced with such statements. I think this has been in plans and Saylor was ready to move on and fully focus on Bitcoin a while back. Planning and executing such transitions take time. While it may be true that MicroStrategy will be reporting losses in billions, I think it is just an accounting requirement or strategy to take impairment charge on their bitcoins. While they don't plan to sell their bitcoins anytime soon, on paper they might have been accruing losses.

Since their bitcoin strategy is a long term one, I wouldn't take report of losses seriously. They have expressed multiple times that it would take bitcoin to go as low as $3k for MicroStrategy to receive a margin call and start worrying about their investment position. Even then they have other options to deal with such situations. While possible, bitcoin's price dropping to anything close to $3k seems unimaginable at this point.

There are also questions like, was it wise for MicroStrategy to invest in bitcoin. There aren't many companies who are invested in bitcoin. And even among those who have invested in bitcoin, they only do so with very small percentage of their total cash. Michael Saylor have explained the reasoning behind the decision in going all in with bitcoin. I do find them very convincing. He is very articulate in explaining all other investment options like real estate, precious metals, stocks, bonds, etc. After carefully analyzing them all, Saylor has come to a conclusion that bitcoin is the best wealth/value preservation asset. Time will tell if he made the most brilliant investment decision of the century, or the worst one.

But one thing is clear, that MicroStrategy's stock prices have benefited from their bitcoin strategy. Before MicroStrategy started buying bitcoin, their stock traded below $150, and maybe around $100. Today, their stock price is trading around $300. Even in crypto bear market their stock price is doing a lot better than before bitcoin investment. When bitcoin bitcoin was going up, MicroStrategy stocks were also trading at high prices like $600, $700, $800, etc. Not everything is about stocks, and I doubt the bitcoin strategy was about increasing the price of the company stocks. I believe it was the side effect of their bitcoin strategy. Initially, their goal was to find a good asset to invest with their unused cash.

Many companies would call such strategy crazy. When Apple CEO, Tim Cook was asked about bitcoin and wether Apple would consider to converting some of their cash into bitcoin. It is a good question, because Apple usually has a lot of cash sitting in their bank accounts. Tim Cook's response was, while he like bitcoin as a technology, they didn't want investors to be buying Apple stocks because of bitcoin, but rather because they believe in Apple as a company and products they make. This too is an example of good decision making. There is no one solution for all. On the other hand, MicroStrategy wanted/wants people to buy their stock because of bitcoin.

As Saylor explained in the past, many institutions can't invest in bitcoin directly due to the rules in place that prevent them from investing in certain categories. Especially with regulatory status of bitcoin still not being clear, many institutions would hesitate to consider such investment options. Because of this, companies who are heavily invested in bitcoin like MicroStrategy can provide exposure to bitcoin in form of their company stocks.

It has been clear for a while now that Michael Saylor has lost interest in running the company or anything that is not bitcoin. Even when he was asked if he would consider building some kind of applications or solutions that utilize bitcoin, he has expressed that he had no such intentions. It seems that he believes there is no need to do anything with bitcoin. His bitcoin philosophy seems to be simple as buy and forget.

He has played a great role in educating people, companies, and institution about the value proposition of bitcoin. He was even able to convince Elon to buy bitcoin with Tesla's cash, which they ended up selling some recently. I am sure many have been influenced by Saylor's bitcoin talks. He does love to talk about bitcoin. Now that he no longer have to deal with day to day business affairs of the company, he will have more time and focus on something he truly loves. I think it is a win for MicroStrategy, it is a win for Michael Saylor, and it is a win for bitcoin.

In the past Saylor mainly would focus on bitcoin and would try to avoid talking about other crypto assets. Just recently, when asked he ended up expressing his thoughts about other crypto assets, and specifically ethereum. He said ethereum is a security and was distributed unethically. That triggered Vitalik Buterin, who called Saylor a clown in one of his tweets. There is always some drama in crypto. While, Saylor tries to convince the world that bitcoin is the best money, I doubt anybody would be able to convince him that other crypto assets have value propositions as well. It is ok. He is is fully invested in bitcoin, and he needs to defend his position.

I am ok with him being bitcoin maximalist and keep educating the world about bitcoin. Crypto world is interconnected, and when bitcoin does well others tend to do ok as well. When bitcoins is in trouble, we see the interest for crypto in general starts fading away.

This post has been manually curated by @steemflow from Indiaunited community. Join us on our Discord Server.

Do you know that you can earn a passive income by delegating to @indiaunited. We share 100 % of the curation rewards with the delegators.

Read our latest announcement post to get more information.

Congratulations @geekgirl! You have completed the following achievement on the Hive blockchain and have been rewarded with new badge(s):

I saw the news yesterday and congrats to Michael Saylor. He's enthusiasm for Bitcoin is moving him places.

I bet if we had 10 of people like him thc crypto move would have been stronger.

We need companies such as MicroStrategy holding Bitcoin in their portfolio. Thus, the price of Bitcoin would stay stable at least in the bear market.

Why would you want its price to be stable? It would become a boring asset.

May be dream for most of us someday, lol

Bitcoin is indeed the next biggest thing in the world and since it goes along with crypto or in someway interconnected,all I wish Micheal Saylor is to have the best in that role taken up.

I keep wondering how Microstrategy will change based on the leadership change. Saylor kept buying more BTC and he didn't really care too much about the other factors involved.

Talk of someone who knows how the future will be and hungry to be a mover then. Bitcoin is success the future.

Michael Saylor would look like a god by 2026 if they didn't sell their Bitcoin. It's inevitable 💖💖😂

only four years away.

Every smart man will love Bitcoin. I love what Micheal saylor has done so far. Bitcoin success means hive success

Interesting strategy to give value to a company for the Bitcoins it has acquired.

Once a valid layer two transaction network becomes mainstream, Bitcoin will remain a store of value and the layer two tokens will become the currency.

It is always a battle leaving regular jobs for crypto, you know this needs to be done for the future but you are inbetween.

It's a gradual move for most of us

I think its a move to separate him and his personal beliefs away from MS and its share price. Its a PR move for micro strategy because at the moment he doesn't look so smart for going de gen at much higher prices. Bitcoin without musk and Saylour would not have actually hit 64k. The market is in state of being broken because too many people are looking at history and thinking it means guaranteed future. Markets dont work like that, they just dont, same reason nature doesn't work like that either. By the time something is painted in a chart and it looks obvious, its too late.

Saylor and Musk are good at spreading the word on social media. This and amount of money they invested definitely contributed in bringing bitcoin to its all time high prices. But don't you think there are many more saylors and musks who don't advertise their investments but are heavily invested in bitcoin and crypto?

So far bitcoin was always able to reach its previous all time high and make new highs. Why wouldn't it repeat the same thing again?

ok, then thanks 4 ur service Saylor. GO BTC!!

It's funny how all this big investors quit their jobs for bitcoin. Well they might have gotten a better insight tho who knows?

Nice balanced article about Saylor. I look forward to what comes next from him.

When you see and know what you’re about , there’s no stopping you . That’s what I can say about Michael Saylor’s bromance with btc .