In a space that no longer than 4 years ago was filled with ICOs that never went beyond the white or even blue paper level, talking about sustainability may be something premature.

We also had our share of projects whose purposes were short terms and dishonest to start with, to put it mildly.

Luckily the bear market flushes many of them away, but they'll resurface in a different form during the next bull market.

Going beyond these types of projects, we find failed tokenomics. They are not made purposely flawed, but the developers either miss the business and economic insight to see the poor design out of the gate or the experience to have done this before.

In many cases, it's a matter of experimenting with something completely new that no one has tried before. It's not like they have models they can apply. Most of the trailblazers in the crypto industry define the models themselves for others to use.

And we know every experiment has a high rate of failure before a breaking success happens (if it does).

These have been the early years in crypto, with some successes and many failures. And it's normal to be this way.

There is a famous trifecta that every blockchain tries to solve: 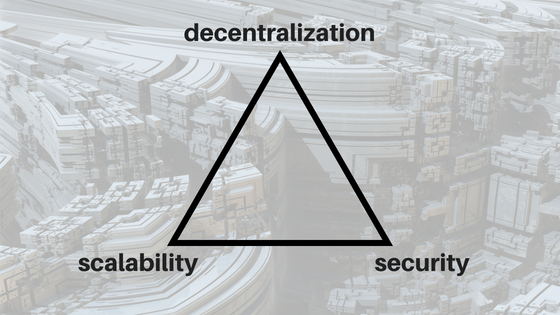 It is said that any of the two can be accomplished but at the expense of the third. Or, you can score well on all three, like Hive does, without having a "perfect score" at any of them.

Hive is not as secure as bitcoin, for example, but it is way ahead in terms of scalability and it is probably more decentralized if we count that only a few mega-miners control most of the hash rate of bitcoin.

But let's move to where I really want to get.

I wonder if that trifecta triangle should be a star, after all, and add sustainability to it.

Let's say, hypothetically, we get a blockchain that scores "perfectly" (we would have endless debates about how to measure and compare them) in all three areas - decentralization, scalability, and security. What happens if that blockchain is unstable and no fix is found? What happens if its tokenomics makes it so? What happens if/when costs become higher than rewards? It becomes unsustainable.

After asking those questions above, I realized the trifecta should remain like that because the sustainability problem morphs into one of the other elements of the trifecta.

But that doesn't make sustainability in the crypto sphere any less important. Just think about it: the longer a blockchain produces blocks, the higher it grows in size. This alone is a challenge for every blockchain after a number of years of existence. So far Hive seems to handle this issue very well, including by using compression of the blockchain data that is mostly text-based and has a very good compression rate. After hard fork 26, peers will be able to communicate between them in a compressed form too if I understood well.

And I've only talked about sustainability at the base layer. But this is something that concerns second layers too, as well as platforms/projects having their own tokenomics.

Blockchain is also built on the assumption that storage would become cheaper and cheaper (for the ever growing blockchain size), connection would be faster and faster (to handle the bigger TX volume).

And with example of ETH, layer2 to take the load off the baseline and similar with HIVE.

At some point, do we need to make the decision to permanent prune “useless” old data? We may be far away, but if the next bull market or the ones after, if we suddenly gained massive adoption, the current parameters may no longer work.

Very good observations and yes, that's the premises from which blockchains start. That there will be evolutions both at the software and at the hardware level to make it sustainable for a longer period.

Keeping the base layer light and moving more and more on the 2nd layers and sidechains will also help.

There was a discussion on the former chain to prune the blockchain. The decision was to not go ahead with it at that time, but the time may come when such a decision may be on the table again.

Would you be “sad” if your old records that were supposed to live on the blockchain forever got pruned?

Hard to say. The way it was the discussion on the former chain, I wouldn't like it, because some important elements may be lost.

But the first candidates for pruning that I wouldn't mind if they were gone would be content (posts/comments/custom jsons) made by or for applications that are no longer around. Especially if those posts become unusable (for example, dlive, dsound). On the custom jsons side, we may have something like Drug Wars and other games that either failed or ended.

EDIT: On second thought, I don't think real pruning is possible. Because blocks are linked between them by hashes. And you can't remove blocks from mid-chain or you will break it. If you don't remove blocks, the size remains the same.

Thanks for sharing your thoughts! !1UP

Thanks for dropping by!

I believe at some point we will accept centralized projects as being good crypto just because they work...

Apps can be centralized (in fact, in some cases, it's probably recommended). Even 2nd layers can be to some degree centralized. Base layers need to be decentralized.

Thank you for this great post. I am reblogging it because I think this is important to share.

Thanks, Bob. Appreciate it.

Learn more about our delegation service to earn daily rewards. Join the Cartel on Discord.

I love the way you talk about turning the blockchain trilemma into a star that includes sustainability.

If a decentralised system can't sustainably fund itself, then it will quickly lose a foothold in all 3.

PS. I'd love to see you flesh this out and turn it into some type of series.

Maybe with a few case studies of how Hive and possibly Splinterlands are getting it right/wrong.

Extremely important conversation that doesn't get the spotlight it deserves!

Thanks for giving me the idea yesterday in the comments section! :)

Maybe additional, more applied posts on sustainability are a good idea. I'll probably do them in the future. I agree the topic doesn't get enough coverage.

Thank you @gadrian.
This is very interesting.
Great info on Bear Market and
Bull Market.
Have a nice day and evening.
Barb :)
#thriveonhive

This time it was more about sustainability, and how prepared are crypto projects to be around for a long time, regardless of the price swings. Thanks for dropping by, Barb.

I don't really think the information is being compressed that much right now though but I did hear a bit about it being compressed in the future as the size of the blockchain will be an issue at the current rate. Would it be applied to just new data going onwards or also applied to old data as well?

The compression is possible right now, said Blocktrades, witnesses just need to do it on their nodes. From what I understood, it's a service/option available for the entire hard disk but only compresses new files. It leaves uncompressed files like that. To compress a blockchain file, the witness would have to use a compressed image or rebuild it from scratch with compression turned on, from what I understood. Since I never ran a witness, I'm not super-familiarized with their terminology.

!BBH This is food for thought.

@gadrian! Your Content Is Awesome so I just sent 1 $BBH (Bitcoin Backed Hive) to your account on behalf of @fiberfrau. (1/5)

Great post and congrats on getting a decentralized curation vote this past week, keep this kind of posts coming!

We have contest and an opportunity to give more visibility to your Leo posts, we hope you check them out!

Nothing is perfect, and to have the 3 is almost impossible in a fully decentralized manner. Always some element of centralization occurs.

I agree. You can do good in all three, but not great. Or you can do great in two and ignore the third one.

Thanks, Steve! Sustainability should be one of the main pillars of any business, including crypto-related.