It's funny, ever since I started coding on JavaScript, I write two-word names as CamelCase instead of like a normal person does. I realized I now write CoinDesk, BeInCrypto, LeoFinance instead of Coin Gecko or Coin Market Cap.

Oh right, the topic isn't developers habits, but the tokenization and innovation on every corner of the Leoverse - I don't even know if this is a word, I just minted it, like an NFT. It's worthless and I am the only one using it, but it's minted now.

But wait, what does CoinTelegraph, CoinDesk, CoinGecko, CoinMarketCap and all these names have in common? Why is LeoFinance so obsessed about having the PolyCub name up there with those OG names? 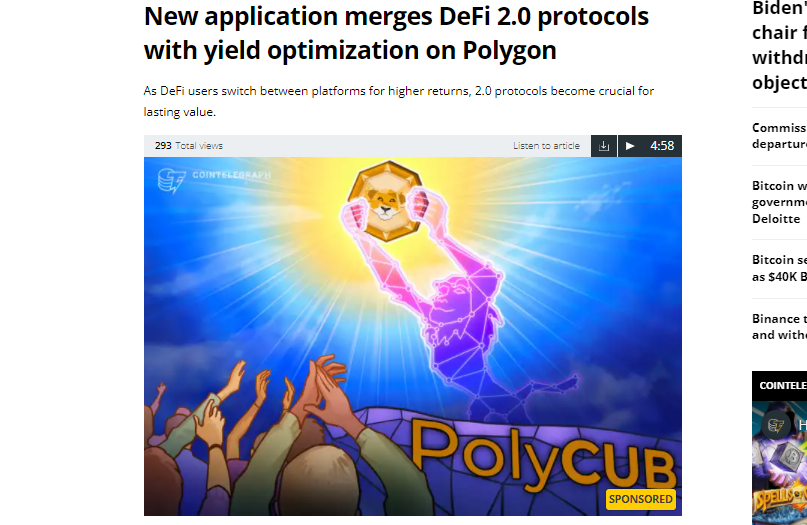 PolyCub was launched ten days ago. Only ten days ago and it is already listed in most of the Cryptocurrency data aggregators, portfolio trackers and insight & value drivers in the space and, if it's not yet listed, it will be in a matter of days.

CoinMarketCap, CoinGecko, Nomics, CoinStats, Kubera and damn, so many other Crypto trackers have already listed PolyCub but that's not the only thing, even DeFi specialized trackers such as Debank, Zerion, Zapper and APYVision are on their way to list it.

I am not shilling, in fact I don't care if you don't click the links and see for yourself, my point goes beyond that. My point is, if your token is listed, people will see it. It doesn't matter if they buy it or not, when someone hears about PolyCub and they decide to look it up on their favorite tracker - no matter if it is the popular Coin Gecko or the Underground LiveCoinWatch - they have to find it, they have to be able to believe the token actually exists and if it is listed on their favorite portfolio tracker well, at least it is legit, right?

That's the first step for PolyCub and their aggressive market strategy: To be there when potential users get curious and want to know more about PCub. That is why being listed on CMC and CG is not enough, especially since the cryptosphere is growing every day and DeFi is becoming a self sustaining universe apart from traditional crypto. If a DeFi project wants to be relevant, it has to be there to be researched.

It's not enough to build and think they'll come, you have to be available in all the possible channels users might look you up.

But if the users find your token on a tracker, then what? It's not like people does their own research.

Let Others speak for you

CoinTelegraph published an article about PolyCub a few hours ago and I am not going to tell you what it says, I guess you'll have to click on the link to find out. I won't tell you because this post is not about the content of the article, but what it means for PolyCub.

I read from a user on Discord a few minutes ago that CoinTelegraph doesn't push users into a project and doesn't drive FOMO in the cryptoverse.

Well, if you think that the point of PolyCub being featured in a CoinTelegraph article is to drive users into buying pCub then let us look at the situation from another point of view:

Let's say our potential user heard about PolyCub on reddit, then went into his favorite tracker to search for the price action and yes, pCub is there. Then, the user googles PolyCub. We both know that he won't scroll past the 5th option and if he doesn't find anything polycub related, he will lose interest, but if he finds a CoinTelegraph article high up on the google search well, now we are talking.

The point of publishing articles in highly respected and known media platforms is not to drive people to buy a token, at least not actively, but to create a synergy between the Press Releases, the Tracker Listings, the Twitter madness, the Organic users, and the Community. If a potential community member gets blasted by PolyCub from several ends, and then they decide to DTOR and finds articles, press releases and news about the token, the community and the platform, then his trust towards the project will grow - and damn we know that DeFi projects need trust before anything else.

Organic views help the articles SEO and giving it some organic traffic, perhaps a retweet or a facebook share ultimately will drive the article higher up on search engines. Everything helps and in the end, this is the first article part of a Marketing Bonanza, but can you imagine how it will positively affect the PolyCub community when PolyCub is every

I was stunned when I saw the article on Polycub as well. It was so cool and I kinda realised I've just hit a jackpot. Just gotta keep stacking my Cub and Polycub.

It's just great to see how the Leo Finance Team is actually putting in marketing out there and not just go with the mistake of "build it and they'll come". It is stacking time right now, I now for sure I am.

Nice post, lots of people will be expecting the number to start going up, but things like this takes time and it’s strategy. Let’s gain their trust first then the numbers will come out later

Yes, people might get put off by the price behavior of late but, I am still buying, once the emission rate drops to almost zero we will have a different price behavior, right now it is stacking time.

Agreed, it is not sufficient but a piece needed to give confidence in the project/team. Then they might listen to weekly AMA or pop up on Leofinance and interact with us.

It all clicks together and that is beautiful !

Exactly man, one piece is not enough by itself, it's all part of a bigger effort to bring PolyCub to the masses and provide that trust many projects lack. Let's what week 4 has in store for us!

Learned something new today. I didn‘t know this is called CamelCase. I like to do this too, but i think i got used to it because of hashtags.

Everything helps and in the end, this is the first article part of a Marketing Bonanza, but can you imagine how it will positively affect the PolyCub community when PolyCub is every …

I like Marketing Bonanza 😁 but how does the sentence end? 👀 Anyway, it‘s definitely necessary to fire up those PR-Engines and get the project in front of as many eyes as possible to attract more people and outside capital so PolyCUB can thrive.

Oh damn , I didn't realize I cut that sentence! The article has no finish, damn.
I'm glad you learned something new hahaha.

great news.
But before people come flooding in, it would be great to spell the word Participate correctly on the airdrop page.
Its a little thing...
But man its been bugging me for ages
;p

Damn, that's true, if it hasn't been fixed I'll mention it :P Read how this all have started with Toruk

Agreed, reblogged, upvoted and I am loving this agressive marketing!

It really seems like the first massive media campaign happening on hive and it seems it's paying off!

I agree, I think we are the beginning of something big. The numerous plans for marketing over a long period of time, and the rapid increase in total value locked are exciting.

It's pretty simple, articles from Crypto OGs like Cointelegraph - Adds to the credibility of PolyCUB. That's the reason why Certik Certification is also necessary. In a world of scams and rugpulls, these are the things provide you an edge over other projects.

This is so exciting, great article. Shared it on Twitter and I will share it with my friends as well. I have been telling them about this since the launch. :)) Let's see how they are going to react to this.

Btw, I just want to thank you Eric for all the hard work you are doing in getting us listed everywhere. Incredible job mate. All the best!! 🚀

People just don't grasp how many scams and rugpulls are in the cryptosphere. Having articles published tells the community that the project is for real and there's no shady business (or if there is, at least it is costing a lot of money to sustain them haha).

Thanks for the Twitter share! So far the dust is settling and the support is fine, let's see what week 4 has in store for us. No need to thank, I'm also invested in this project, if the project booms, we all win :D